Barbara Liz-Cepeda refuses to let the pandemic stop her from running her Puerto Rican cultural arts school Escuela de Bomba y Plena Tata Cepeda. As the founder and the director of the Central Florida non-profit, she’s making it her mission to expand her audience and reach the Puerto Rican diaspora around the globe through virtual platforms.

Barbara Liz-Cepeda was used to giving her classes in a packed studio, filled with students eager and excited to learn about Puerto Rico’s music and culture. Now, she puts on her custom-tailored skirt and rolls out her percussion instruments to give her classes virtually from her living room. 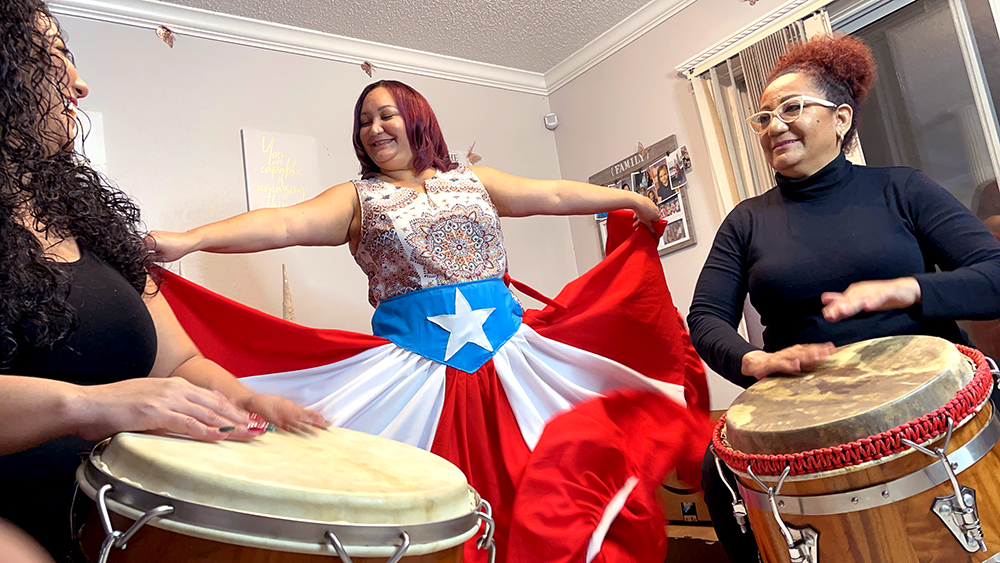 Barbara Liz-Cepeda (center) performs with her sister Caridad Cepeda (left) and their mother Tata Cepeda (right) who are visiting from Puerto Rico. All three women are involved with promoting Bomba and Plena through dance classes and community events. (Photo by Héctor García De León)

The nonprofit’s mission is to educate the Central Florida community on Puerto Rico’s culture and history, and teach dance and percussion classes. Liz-Cepeda is the first person in Central Florida to open a school dedicated to Bomba and Plena, named after her mother “Tata” to honor her while she is alive.

When the pandemic first started in March, Liz-Cepeda said she struggled with the transition to virtual classes and that it took her about a week to learn new software like Zoom and Microsoft Teams.

“Once I got the hang of it, I learned pretty quickly. And then that gave me the emotional support where I was  at a point where I can say, ‘I know we’re going through a pandemic, I know that this is something new for a lot of people. But we have to make it work,” Liz-Cepeda said.

When it came to virtual teaching, Liz-Cepeda turned her living room into her studio in just a few days, but it wasn’t the same.

Both Liz-Cepeda and her students felt the classes weren’t the same. Class enrollment decreased due to the pandemic and students said the experience and feeling wasn’t what they felt in the studio. No matter how much teaching or how much playing Liz-Cepeda would do, it just wasn’t enough.

So, she had to get creative to find new ways to reach a larger audience.

“The good part of Covid-19 and the pandemic is that because we were seeing ourselves regressing in a way that we were not reaching the amount of people that we wanted,” Liz-Cepeda said. “We have to be creative and think about things where we could reach the people, where we can reach the community.”

She began a virtual book study where people from the United States and Puerto Rico meet every Saturday over Zoom and discuss topics about Black Lives Matter, slavery and Puerto Rico’s history and how it affects us today. They are on their third book now, moving to their fourth book soon which will be, ¡Negro, Negra!, a compilation of lectures about Afro-descendants of Puerto Rico.

“Because of the pandemic and because we were trying to reach out and expand ourselves, we were thinking, how can we also offer back to the community? What are we also giving back?” Liz-Cepeda said.

Liz-Cepeda opened her non-profit with the mission to give Puerto Ricans in Central Florida a piece of home through in-person classes and performances. Now, through her virtual platforms and social media, she’s been able to increase her audience and reach people from across the globe.

“So our dance school has made a great impact in our community because we’ve been able to give that part of the traditions and the culture to those Puerto Ricans who are here in the diaspora, and they can reach out to us, they can sit with us. We have created a community for them, it’s not just taking the classes.”

Liz-Cepeda also works as a media specialist at Boggy Creek Elementary School and has two children. On top of her non-profit, she’s helping her 7-year-old daughter with digital learning.

“I’m a school teacher, so I have to go to school every single day while my daughter is doing virtual classes. So I depend on a lot of my family and friends to take care of my daughter,” Liz-Cepeda said.

She said it hasn’t been easy working at a school during the pandemic, but she said she’s taking the necessary precautions to keep family and loved ones safe at the school and at home.

“I am very proud of my school, my board of directors, my family, who have helped me along the way,” Liz-Cepeda said. “I can say that Escuela de Bomba y Plena Tata Cepeda will be here for a long time.” 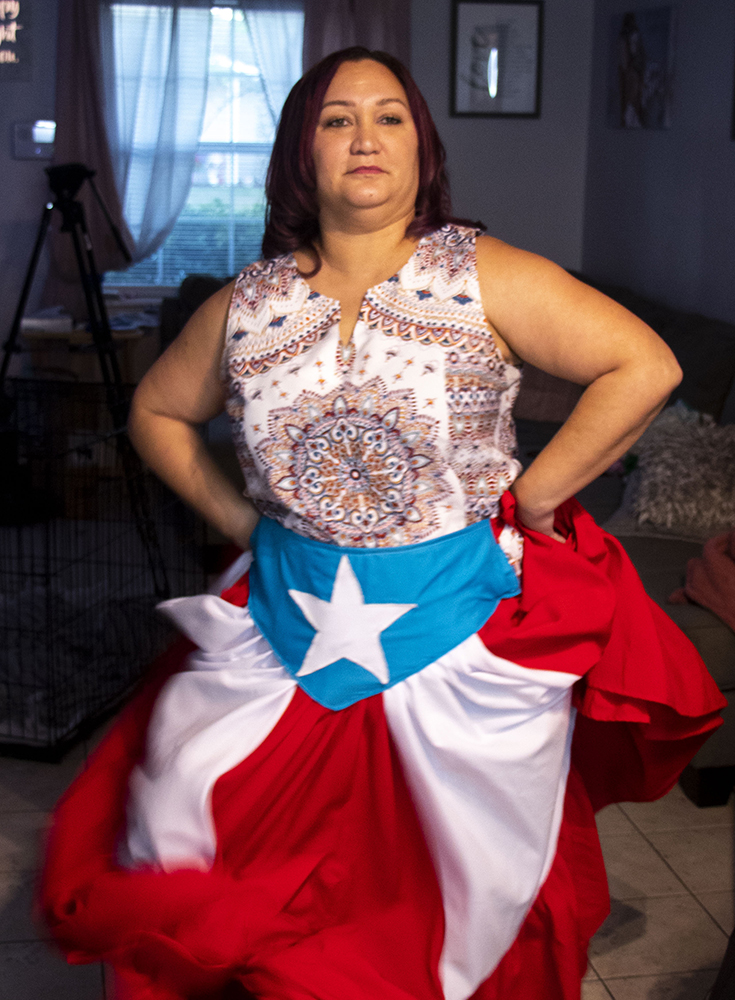 Barbara Liz-Cepeda wears a custom-tailored skirt with the Puerto Rican flag on it while she dances to the beat of the Bomba drums in her living room in Kissimmee, FL. (Photo by Héctor García De León)

Margarita “Tata” Cepeda is the granddaughter of Rafael Cepeda, the patriarch of Bomba and Plena. Her daughter Barbara Liz-Cepeda opened Escuela de Bomba y Plena Tata Cepeda and named it after her mother to honor her while she’s alive. (Photo by Héctor García De León) 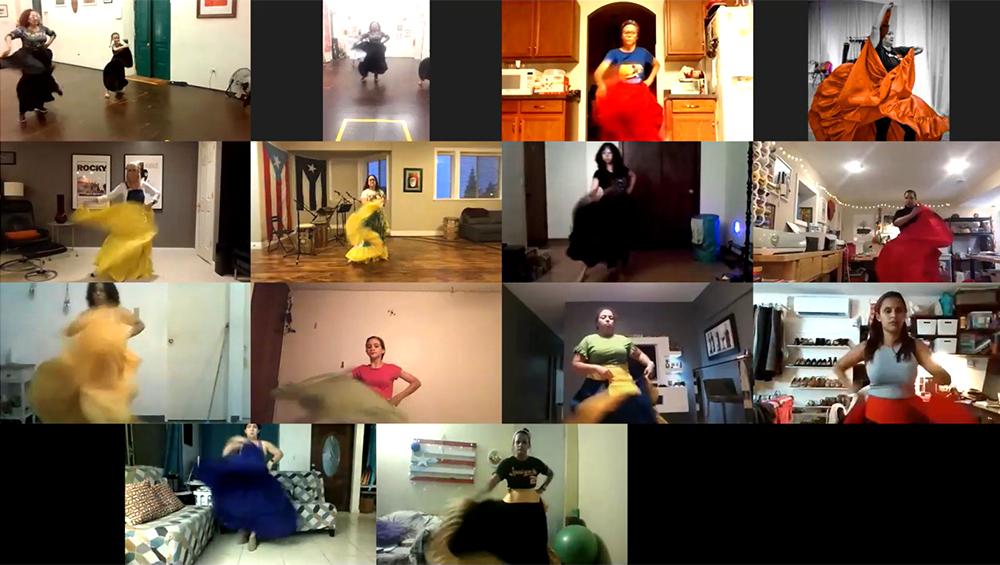